Who's excited for the start of the Los Angeles Kings' 2014 season?

Share All sharing options for: Stanley Cup Final Game One: Welcome Aboard!

The Kings are in the Stanley Cup Final again, which means that there are a bunch of new fans of the team and others  that we haven't seen since maybe 2012. And I completely embrace them. Some may call them bandwagon fans, but not me. You just don't have time for 103 hockey games. I don't blame you, because that is a lot of hockey played just to reach the Final. Now, seeing as I am the one of the most knowledgeable authorities on hockey I know of, a lot of you are obviously going to be turning to me for the vital information you need going into this best of seven game series.

First off, yes, this is a best of seven series just like with basketball and baseball. Moving on to the important stuff...

WHO'S ON THE KINGS?

Some you returning from 2012 may recognize the names Anne Jay Kobidor and Brad Doty. Well, there's also Mike Carter and Jeff Richards from that run as well along with Jared Store, Jonathan Williams, and Justin Brown. They are led by goalie of the year, Jon Quick. New additions to this year include James Muffin, Taylor Taffilies, Marathon Bag-o-Tricks, and Tanner Pearson.

SO HOW DID THEY GET HERE?

For 82 games out of the year, the Kings were incredibly streaky, but were good enough to make the playoffs despite the overwhelming All-Star roster assembled in Anaheim, which won the division in the regular season. They were a group with a ton of depth, and defensive prowess, making them an odds on favorite for postseason success. And as for the next 21 games...well, the Kings were incredibly streaky, but were good enough to win each series. They made history rallying from three games down against the San Francisco Sharks to win four to three, and then murdered icon Teemu Selanne of the Anaheim Ducks of Mighty Los Angeles in the next round. For the conference finals, the Kings faced last year's champions, the Chicago Bears. Alex Ramirez scored the game seven winning goal in overtime (that sort of operates like football's overtime).

WHO ARE THEY EVEN PLAYING?

The Kings are up against the New York Yankees Giants Jets Knicks Rangers. They play in Manhattan, whereas the New York Islanders play in an area no one ever goes to when they visit New York. The Rangers, lovingly referred to as "the Blueshirts" because that's as clever as anyone is capable of getting in New York, are a scrappy underdog team. They have battled bigger (Philadelphia), more skilled (Pittsburgh), and flukier (Montreal) teams, all without home ice advantage, yet have persevered. Have you ever seen The Warriors? They are kind of like that. But not the Warriors, the titular gang. They're more like these guys, what with having all those ridiculous antics in their series' just so people will pay attention to them. 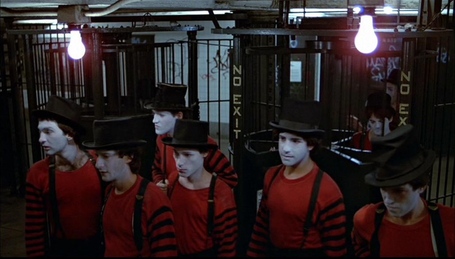 They have a very pretty goalie named Hank, too.

SHOULD I BOTHER DROPPING BY STAPLES CENTER TO RIOT?

Of course! It's Los Angeles after all!

NO. I MEAN, DO YOU THINK THE KINGS ARE GOING TO WIN, AND THEN CAN I RIOT?

Well, despite people giving the early edge to the Kings, the Rangers on paper have a very good team. New York also has the first elite goaltender the Kings have faced these playoffs. They don't have the firepower Chicago had, but New York is fast, and that's given the Kings problems before.

Yep! Will Ferrel has been dropping by a bit, and Chris Paul and David Beckham also have shown up. Alyssa Milano is there most of the time, but she's pregnant. Gross, huh?

WHICH FAMOUS PEOPLE WILL BE AT THEIR GAMES IN NEW YORK?

WHAT CAN I SAY TO ANNOY NEW YORKERS?

Nothing really. Just compliment their team for doing so well despite being nothing but castoffs and rejects from Tampa Bay, Columbus, and L.A. You could tell them Curb Your Enthusiasm was a great show until Larry David moved to New York and ruined everything. Also, their pizza sucks, but everyone says that. It just bugs them for whatever reason. Probably because their proudest achievement is a greasy triangle that is served anywhere.

Oh, look at that. The Kings are in the Finals. Again. That's pretty cool, I guess. Second time in three years, hm. I mean, yeah the Bruins and Blackhawks did that recently, too. Plus, the Red Wings and Penguins both went in consecutive years. Except the Kings are the most recent. Which is nice, right? Yeah, that's okay. Doo-doo-doop, ho-hum.

Prediction: The Kings lose and everyone flies into a panic since game ones have a tendency to decide a whole series.