Look at that picture of Justin Williams. Turnovers wound up being the story in game one, as a Drew Doughty turnover led to goal to kick the scoring off, and a turnover by Dan Girardi closed things out after Justin Williams capitalized on it. More importantly, doesn't Yoshi imitate Williams' celebration?

The glide. The grin. The soulless eyes. Well, only Yoshi has that going on, but still. Yep, I bought the new Mario Kart this past week and that's all I have been doing between watching and blogging about hockey. So it's been a lot of Mario Kart. I am really glad they decided to bring back the Koopa Kids for this game (the bosses from Super Mario Bros. 3 and Super Mario World, in case you whippersnappers don't know who they are), though I am less thrilled to hear Robyn Regehr is likely returning to the Kings lineup. Why do I mention this? Well... 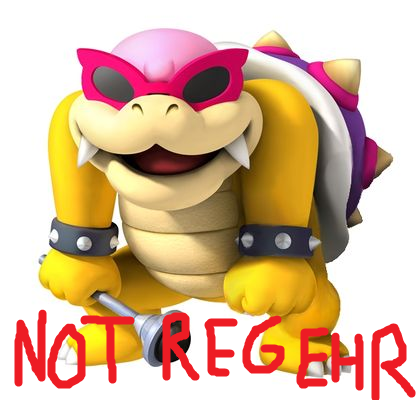 I know, I had to check a couple of times to make sure also, but the lack of ears are a dead giveaway.

Anyhow, the Kings postseason run has been as crazy as a four track Grand Prix. The Kings were getting hammered to start. Red shell after red shell pounded them in the beginning, and right as they started to fight back they hit a banana peel in the form of a soon-to-be-ex-Shark Patrick Marleau overtime winner in game three. Fortunately, the playoffs and Mario Kart allow someone to be dead last and forgotten to then storm back and win. Which is exactly what the Kings did.

The second series, the Kings were clearly better than Anaheim, essentially half-assing through the whole series until the Ducks were actually in a position to win (sort of like last night's game!). Los Angeles put the pedal down and roared over and past the Ducks with a resounding game seven win. It assured everyone they could win when they needed to and was just downright embarrassing for Anaheim. The Kings left the rest of California in their wake.

So now the Kings have leaped out to an early 1-0 series lead against the New York Rangers. But do the Rangers rebound early or will they wait around with a blue shell and heave it at Jonathan Quick? (Like they have with other goalies with Chris Kreider playing the part of the blue shell)

Only time will tell.

Yeah, I really only want to talk about Mario Kart right now. Um, the Kings...They did not look, I guess you would call it "good", in the first forty minutes of that game and yet still won. During the first period I am fairly certain the Kings never cleanly handled the puck for over three seconds. But again, they won. Their twenty shots they took in the third period, I'd say maybe three were legitimate scoring chances, whereas the Rangers took two shots but both were more threatening than anything the Kings managed. BUT THEY WON. Now do they turn shit around, or do they drive off the proverbial cliff?

Prediction: They probably drive off that proverbial cliff.