Why Ice Girls are Important

Time to educate you idiots

Share All sharing options for: Why Ice Girls are Important

This has gone on long enough. Stop. Stop the tweeting. Stop the blogging. I will end this debacle. If you somehow have missed it, the San Jose Sharks have set off the worst attack on women since, well, ever. They took away their employees' rights to access to birth control, made ticket prices for women more expensive, women have to attend the game in their underwear, and if some guy wants to hook up with a female during the intermission they have to comply.

Actually, none of that is true and the Sharks are hiring Ice Girls.

Since it is the Sharks however, things didn't go the way they were supposed to, and now they look like a bunch of fucking idiots. (again!) It seems to me the poor innocent Ice Girls are being viciously scapegoated by the out of control, cave dwelling, deranged fan-base. The Sharks were well on their way to completing their off-season project of turning their joke of a franchise around with the signings of John Scott, Mike Brown, and a sock full of semen. But instead they failed to trade underachieving phenoms, Joe Thornton and Patrick Marleau. Obviously, their fans were not happy with this lack of activity, so when the Sharks made the innocent announcement they were hiring Ice Girls the masses latched onto this bit of news, and said the move was completely idiotic, which was totally irrational.

Thankfully, one fan kept a level head throughout the storm and wrote why Ice Girls are great or something. It was really, really long and I didn't actually read it. But the naysayers threw the sensible one in front of a figurative train like they were some unwanted baby being thrown in front of a literal train. So, okay, I know you Sharks fans are upset that your team only half completed its turnaround. But you have all forgotten the benefits Ice Girls bring to communities. Allow me to enlighten you.

THEY WILL SAVE THE SHARKS

The Sharks are a team Vancouvering Canucking along right now. They are incapable of winning, and refuse to commit to the necessary rebuild. Their TV contract is terrible, the fans are committing mass suicides, and the arena is stilled called the SAP Center. The rumors are that the team may possibly relocate. Ice Girls are literally the only thing stopping the Sharks from running to Seattle (where they already love alliteration and teal jerseys). There are plenty of passionate fans that could be in attendance to see a combined ninety seconds of scantily clad women clean ice. Yet the Sharks have been hesitant at taping those reserves because they only want pocket protector wearing virgins who are terrified of sex going to games. But the fandom of real fans can save the franchise from moving to an actual city and out of a suburb.

Would you take a team that features a guy named Freddy wearing sweats cleaning your ice and a player who is a grown man-child named Patrick with out of control eyebrows? Or would you want a woman named Cheri who's half naked cleaning ice suggestively, while you have a player who was a Mon-Star from Space Jam named John Scott gets ready to murder someone? You already know the answer.

Plus, if you are a sick kid dying from something, getting visited by an ice girl is way better than Sharkie.

IT'S FUN TO PISS OFF NERDS

Sure, some may say that the idea of Ice Girls is sexist, but they're just unattractive and jealous. They may try and "fight the good fight", but how can you hate pretty young ladies? These are the type of people that go to Hooters for the food.

IT GIVES GOALIES SOMETHING TO LOOK AT 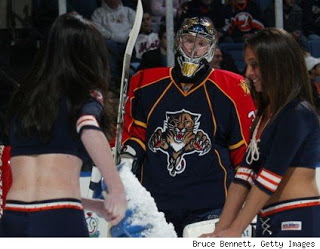 I KNEW ONE GIRL WHO TRIED OUT FOR THE KINGS' ICE GIRL CREW BACK WHEN I ATTENDED NORTHRIDGE, AND SHE WAS REALLY COOL AND HOT AND I HOPE SHE IS READING THIS SO SHE WILL BE FLATTERED AND GO OUT WITH ME

And she still made it look good.