Oh great, the Stanley Cup is back

This has been a boring as fuck off-season for the Kings.

"Oh, but the Kings won the Stanley Cup and you could see what each guy does with it on his day. Don't be ungrateful. This is really special", you say.

Nope. Been there, done that. Put this cup up on the shelf with the other one. Oh? There's only the one? I guess it was cool of Los Angeles to loan it out to Chicago for a little bit. But now it's just been the same old stuff with the Cup. Take it out golfing. Take it home to meet your family. Sit around and binge watch Freaks and Geeks with it. Force it to go to Ithaca. The wooing period with the Cup is over. The Kings wined and dined, did all their romantic outings, and had their honeymoon with the Cup. Now they have settled down into that state of familiarity.

I mean, this was Anze Kopitar with the Stanley Cup in 2012: 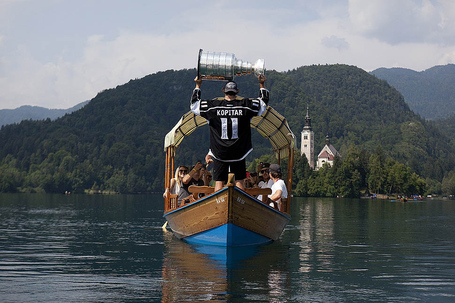 He can't keep his hands off the Cup as he gallivants through his weird as shit storybook country. Boat rides! Castle visits! A parade! Anze and Stanley were the hot couple of all east Europe. Now? 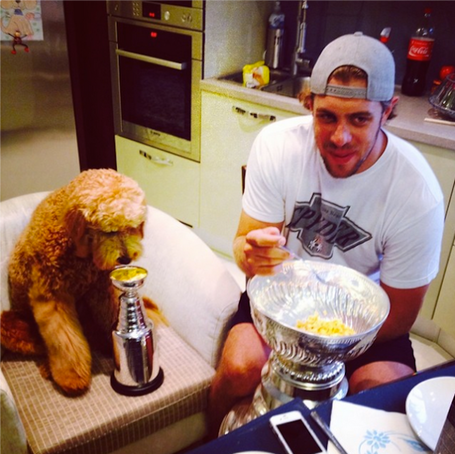 Yup. Hanging with the dog eating breakfast. I mean, hey, that's still cool and all, but the fire's gone out. The passion is spent. Anze and Stanley have settled down, now content to just hang out for meals, and maybe a helicopter tour of Slovenia.

The rest of the Kings that are hanging with the Cup again? A quick rundown: 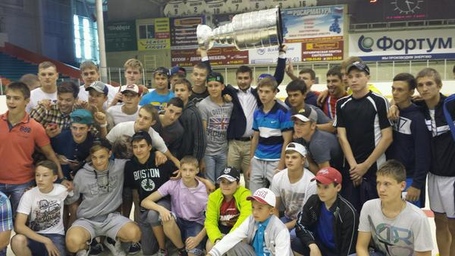 To be fair, I think Putin may have outlawed happiness.

And the Cup's trip to Vegas this time only had like eight of the guys on the team go out with it. Even the new guys were being snoozes with the Cup though. Tyler Toffoli had a party at least, and got ice cream. Jake Muzzin went home and had a party also. Tanner Pearson hung out at the local rink like this was his third time with the Cup. Robyn Regehr went bowling, but at least had this awesome photo taken, too. 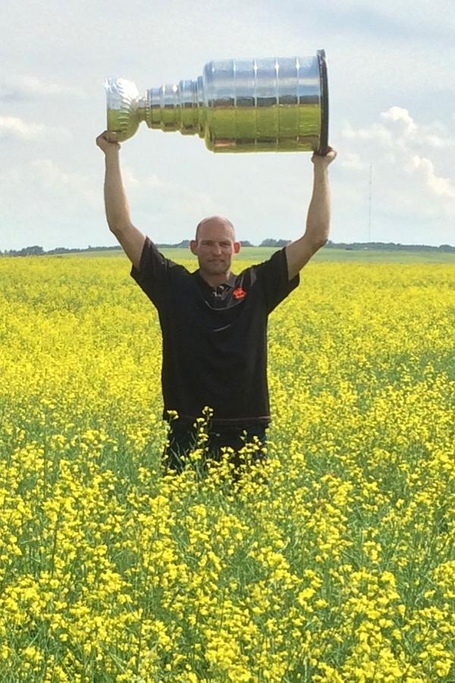 It kind of looks like a scene out of Shrek.

All the Kings players, once they win the Cup again, will just be sitting around arguing with it about whether to have Italian or Chinese food for dinner, why they were just sitting around watching The Big Lebowski again, and what is that Pritchard guy doing here, he's here every time you come over...WHAT DOES HE MEAN TO YOU, FOR CHRIST'S SAKE!

Then there was Marian Gaborik. Gaborik had a day with the Cup out in southern California, then a day with the Cup in Slovakia, plus all the parades in South Bay and Downtown L.A. that I'm pretty certain he insisted upon. Eh, rookie mistake. Can't blame the guy for being excited about it though for his first time. At least he had a first time, right Sharks?

As for me, I saw the Cup back in 2012 at Knott's Berry Farm. I then road that Silver Bullet roller coaster three consecutive times and gave myself another concussion from doing so. What do I do this time? See the Cup at a Dick's Sporting Goods store and buy golf gear? I can't afford the time or money to do that. Stanley, I'm sorry. We can go see Guardians of the Galaxy or something maybe next weekend. I guess we can even take Phil.