And they know how to read real good, too.

I'll let you in on a little secret, I wrote some things above about Kings fans, but they're not true. I was being sardonic. But, as I learned yesterday, Kings fans don't read past the headlines, so they'll never know that I'm mocking them. This is a safe space, non-Kings fans.

Allow me to explain. On Tuesday this week, our Kings blogger (and noted Kings fan) Dunn wrote a piece about the Kings which was also a not-so-subtle brag about how the Kings have won two Stanley Cup championships in three years. However, the title was "Who cares?" with a subline of "Oh great, the Stanley Cup is back."

Not being ones to read past the headlines, a handful of Kings fans became enraged that we would ever mock the Kings. The idiocy of getting upset about a post mocking the Kings on a site called "Battle of California" is pretty hilarious enough, but the fact that Dunn's piece was far from a knock on the Kings really pushed this one over the edge.

... He says, on a site that devotes at least a third of its attention to the Kings, about an article that is bragging about the Kings' success.

Yeah, Dunn! Stop bashing your favorite team by writing articles about how great they are.

Posting about the Kings is a hate crime.

Anyway, to try to save these folks some further embarrassment, it was pointed out that they should probably read the article before jumping to conclusions...

Shockingly, they didn't understand what was being said: 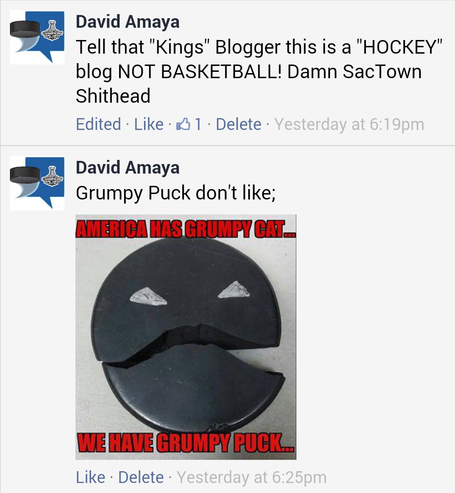 You see that, Dunn?!? Go back to Sacramento and watch basketball. You've made this un-American puck mad.

Not too long after this, the stupidity started spilling over from Facebook and on to our comments page. From an account that was created just moments before this comment was posted:

What's funny is that just last week I made a joke about Kings fans being illiterate. I never expected them to prove me right so quickly.

Since the misplaced outrage started yesterday evening, it's possible we'll continue to see some more stupidity from Kings fans throughout the day. We're all very much looking forward to it.