Because you need a way to kill time while you're stuck in your cubicle.

Unlike some other asshole who we all used to know, I never abandoned Battle of California for a high-paid gig as editor of a big-shot gaming blog. Which is unfortunate, because I'd do anything to leave this place behind.

So to help convince people that I, too, can write about vidya games, I thought I'd let you know about an upcoming web-based hockey video game tournament where you can win a $100, $50, or $25 Visa gift card (or, in a separate contest, a $100 or $50 gift certificate to NHL's Online Store). The top three players who score the most goals against the computer will get the Visa cards, and there will be two drawings, one winner to be someone who retweets the game's hashtag, and one for a randmonly chosen person who buys a verified pre-order copy of the graphic novel that the game is based on, either through Amazon or Amimal Media Group, the book's publisher. 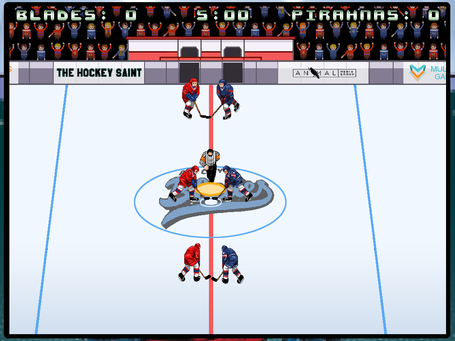 The Hockey Saint Arcade Edition game (which you can find by visiting their website here) will be runing their tournament on Saturday, October 4th from Noon EST to Midnight EST, [NOTE: This tournament has been temporarily postponed, new date is 12/13, noon EST - midnught EST.] but the game's already up and running right now so you have plenty of time to practice.

The game and the tournament help promote Howard Shapiro's upcoming graphic novel The Hockey Saint (which, full disclosure, I was sent an advanced copy of to review for Battle of California and will be doing so next month - though neither this posting nor my upcoming review are paid promotions).

The Hockey Saint Arcade Edition is a retro-style hockey game. While it understandably lacks the realism of EA's NHL series, it's still a fun play that takes you back to the pixelated days of pre-NHL94 hockey gaming.

Admitedly, there was one thing right out the gate that I disliked about the game; the keyboard-based controls. They are infuriatingly frustrating. I'm not sure why one would not use a keyboard's directional arrows to control movement in a video game, but that's the decision that was made here. The game doesn't have any direct gamepad support, so I got around this by mapping my gamepad directly to the necessary key presses from my keyboard. I'd definitely reccomend this, otherwise this game is almost unplayable (and to be honest, using a gamepad will probably give you a pretty big edge when the tournament rolls around).

The game is complete with hockey fights and crying players, and a roaring crowd cheering you on to pixelated victory. Ultimately, it's a great way to kill some time, and if you're able to turn it into a $100 gift card or $100 NHL Shop gift certificate, more power to you.

I'm not sure of the exact details of how the tournament will be setup in October, but perhaps you'll have the opportunity to interact with other players, which will give you the opportunity to best represent Battle of California as the collection of utter assholes that we are.

Good luck, and if you win anything you are legally obliged ot share it with me since I brought it to your attention.