The Battle of California sequel you have been waiting for

Last summer, everyone's favorite made for TV shark and weather themed movie carefully predicted the outcome of the Pacific division. The Kings were the hero and won everything. The Sharks were sharks in a tornado and sucked. The Ducks were the token hot chick that nobody liked. I don't care about Canada. The Coyotes were Tara Reid.

Anyways, the sequel to Sharknado came out, creatively titled Sharknado 2. The only characters from the first movie were the has-been 90210 guy as the hero and Tara Reid, who only had one memorable scene in this movie. Which was actually one more memorable scene than she had in the first one.

Thankfully, there were enough cameos in the sequel that I am able to base the 2014-2015 Pacific division predictions off them alone. In fact, there were actually too many. Sadly, this meant not including the likes of Matt Lauer, Al Roker, Wil Wheaton, Kelly Osbourne, that guy from Curb Your Enthusiasm, the black dude in Shark Tank, Vivica A. Fox, Perez Hilton, the lead actor from Airplane!, Michael Strahan, Kelly Ripa, Kurt Angle, Pepa, and a truckload of other people I can't currently remember. This, however, is the definitive Sharknado 2 based prediction, so deal with it.

Mark McGrath as some guy that's a friend of the hero and is borderline competent!

Sugar Ray here is the epitome of the Los Angeles Kings. He, like the Kings, never stopped rocking and fuck everyone else who say otherwise (ignore 2004 to 2009 for both). Now he's an actor in a hit movie, and the Kings have two Stanley Cups. Those fat asses from Smash Mouth and Limp Bizkit could never survive a sharknado and the Kings are the champions. Also, this movie is in New York, and guess what? The Kings can handle that shit, too. 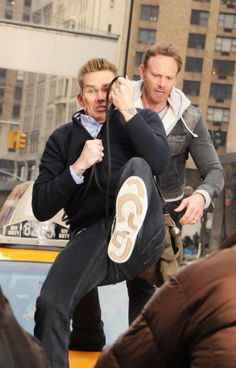 As for the movie, there was pretty much nothing going on with this character. He didn't die, despite the fact he probably should have three times. Hard to kill, I guess. Instead Mr. McGrath survives with his whole family intact and makes a bitch'n super-soaker flamethrower. His kids in the movie are a couple of wieners, which I suppose could represent the Kings unfortunate offspring, the Sharks and Ducks. I also kept singing "Every Morning" and "Fly" whenever he showed up on screen.

Judd Hirsh in the same role as ever!

You may need to ask your parents about this one. A long time ago there was a show called "Taxi". It featured this guy, Judd. Judd drove a taxi in the movie! It's an attempt at a throw back with disastrous results. Obviously, this is the Calgary Flames who, under Brian Burke, have assembled a squad of goons and mostly crap which may have worked in the old era NHL, but less so today.

This GIF was far more entertaining than the old guy trying to relive his glory days, so thank me later. As I was saying, Judd's role was as a taxi driver, and I think that was as far as the writers got with his character. Most of his scenes looked like he was just making shit up as he went, and it resulted in a lot of taxi driver cliches that were repeated several times. Mercifully, Taxi Tim or whatever his name was, is killed after trying to swing across shark infested waters from atop his taxi. Not coincidentally, the Flames were also the old guy that got killed in the first Sharknado. Sorry, Calgary.

Andy Dick as a cop!

Andy Dick, for whatever reason, remains a person that actually exists. He's not particularly talented, and there's been no attempts at real improvement with him at any point. Sound familiar Oilers? Sure, the right pieces are there. The Oilers have young, fast forwards and possibly stability in net. Andy Dick is in a role he can goof off in as an incompetent cop in a movie with sharks attacking a 747. Neither deliver. 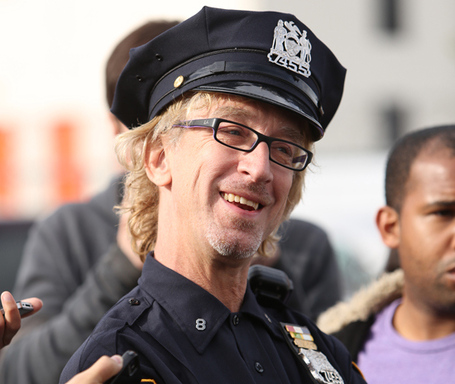 It looks about as believable as the Oilers making the playoffs. Andy Dick however did not die in the movie, which was by far it's greatest shortcoming.

Billy Ray Cyrus as a doctor for god's sake!

Miley Cyrus's dad was that mullet wielding asshole who did that achy breaky hearty song from the 90s. He's a god awful sack of shit we wish would go away forever. This cameo is for the Vancouver Canucks.

Okay, okay. Yeah it's another GIF that has nothing to do with Cyrus or the Canucks, but I think you are better off with this instead. I don't know where he got the baseball bat from, and stop asking questions. The Mets apple rising slowly up makes me laugh every time for whatever reason. Dr. Billy Ray is never seen later in the movie, as they couldn't figure out whether to make him an actual character or just kill him off grandiosely, a similar purgatory Vancouver faces with their season.

You may know him more as that guy with the trucker hat that sounds and looks stoned all the time from 30 Rock. Except in this movie he has a baseball hat. It's a slight change, but it's pretty obvious Judah is still Judah. Kind of like if you go by Phoenix or Arizona in your name, the Coyotes are still a Ziploc bag full of toenails.

Hahaha, he got bit in the ass by a shark. He died early in the film, and the Coyotes are likely dead out the gate.

Jared from Subway as Jared demanding you to eat fresh, dammit!

Over the years, Subway has had a rotating roster of people who claim to be Olympic athletes endorse their sandwiches. Currently, Mike Trout is also pitching Subway, since it appears to be a consolation prize for finishing second in MVP voting. But then there is the former fat guy Jared. Jared got really big on burgers and fries, but now he is down to a smaller size. So sayeth the Subway commercials, which have featured Jared since the dawn of time. He is in the movie for three tenths of a second mentioning eating fresh and Subway. What a surprise. Sharknado 2 was also sponsored by Subway. More surprises. 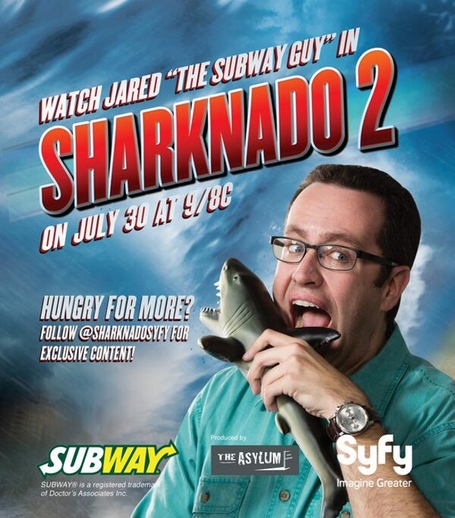 This was a real advertisement

The Ducks are Jared because they both somehow stick around and show up regularly despite others wishing they would finally go away. The Ducks feature terrible personalities like Corey Perry, Ryan Kesler, and Ryan Getzlaf. Jared features the terrible last name of "Fogle". Plus, only idiots named Jared like the Ducks. Jared Fogle miraculously didn't die, and the Ducks miraculously win games.

How do you know something is eviler evil? When it has a scar. Like the Scar Shark! He was featured prominently when Tara Reid lost her hand (in the GIF at the start of this post), and again at the end of the film. You know, the part where the hero kills the shark, finds Tara Reid's severed hand in it, and takes the wedding ring off of it to give back to her. Anyways, the Sharks are this particular shark. Here's as to why:

As you can see, the Shark in the movie dies in pretty spectacular fashion. It was a jaw dropping display, that got everyone's attention. This is something that has only occurred, at most, probably only three other times in history. People will be talking about this death for years. What a colossal fuck up by that Shark, right?