Let's share some of the results from last week's reader survey.

Share All sharing options for: Meet Our Readers, Part 1

Last week I posted a reader survey, and this week you're stuck reading some results. About 190 readers answered over the past week, which I suppose is a decent enough sample.

About 42% of you indicated you do not have an SBNation username, which means many of the people who took the survey are fucking liars. 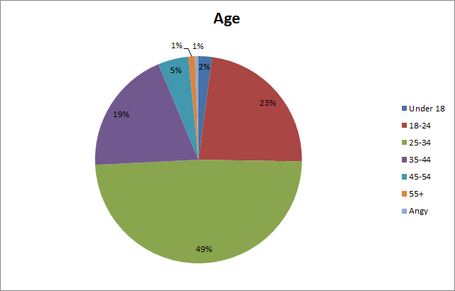 The age range is mostly what I expected. I figured our readers were in the 18-34 age range, but that would break down as most readers being 18-24. So in that respect I was quite a bit off, as a huge majority of our readers are 25-34. Only one person answered "Angy," by the way (my bet is it was Angy, if she was able to find her reading glasses to get through the survey). So we're skewing a just the tiniest bit older than I'd imagined. Our maturity level really tricked me here, you guys...

Hey, speaking of "you guys," here is something that is completely unsurprising... 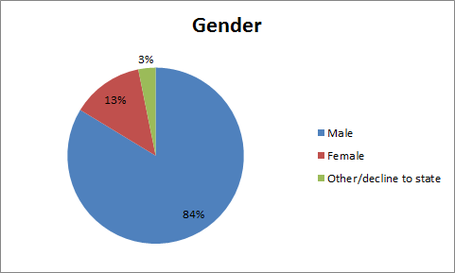 It's a god damn sausage fest in here. I imagine this would have been even worse, somehow, prior to Stace coming on board as a writer. Thanks for ruining our boys-only club, Stace. 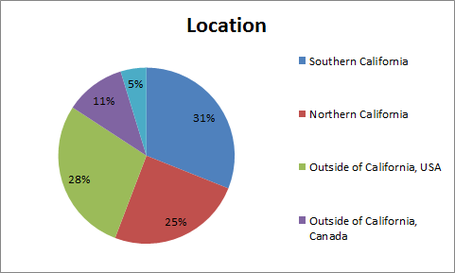 56% of our readers are located in California, which is actually a little surprising to me. Apparently California is so great, that all kinds of people who don't even live here want to make sure they're up to date on all of the latest California NHL happenings. Keep on saving up, folks; maybe one day you can leave your wretched shithole of a state and live where people can actually take pride in their place of residence.

Predictably, of those living in California, most of them come from the better part. This makes sense as there are two teams represented from that area, though the edge to Southern California is a slight one. 5% of our readers live outside of the USA and Canada. 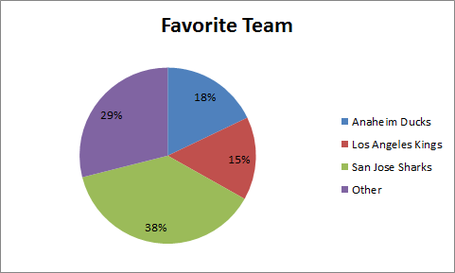 Most of our readers are Sharks fans, and the Ducks and Kings readership is split pretty evenly with Anaheim taking a slight lead. I'd imagine the Sharks take such a big lead because of the great work Fear the Fin does on the SBNation network, and a lot of those fans eventually find their way here. 29% of our readers like some other shitty team, with the breakdown as such:

Teams not listed did not have any fans representing them in our survey. 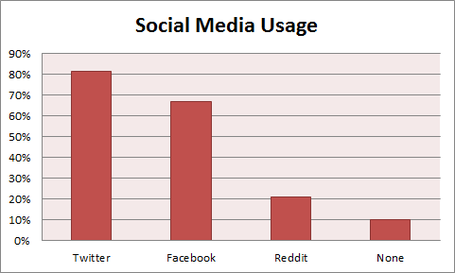 Most of our readers are social folks, with almost everyone on Twitter (80%). Facebook is less popular and, as seen further below, is barely used at all for BoC purposes. Even though only 20% of our readers use Reddit, that's a whole lot more than I expected.

A smaller percentage than those of you that use Twitter actually follow us on Twitter as well, but we suspect it's those out of state jerks responsible for the discrepancy. Likewise, barely anyone follows us on Facebook, but that's because Facebook really, really sucks. 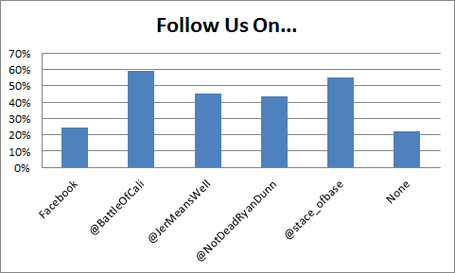 Even though she's new around here, more people are following Stace than either Dunn or me for some weird reason, and I have a slight edge on Dunn. This doesn't make any god damn sense, since Dunn has more followers on Twitter  than I do, but I'll take it. Fuck you, Dunn!

52% of our readers occasionally share our posts on one or more of the above mentioned social networks, and/or one of the following social networks...

There sure is a reoccurring toilet theme here, you jerks. And I'm not sure what Mr. Sonstiges is even asking here or where he saw that word, let alone the fact that the "Other social media sites" section is no place to be asking us questions.

When asked if we should get more serious about hockey around here, you answered with a resounding "no:"

...So it's just pure horseshit from here on out! Only 2 people selected "1," and all the responses on the scale averaged out to 4.17.

Finally, what we really care about... Fuck, Marry, Kill.

Apparently, a whole lot of you have never played this game before, and are too dumb to follow the instructions given. As a recap, you're supposed to choose which of the three of us you'd like to fuck, which you'd like to marry, and which you'd like to kill. You can only use each option once. Though many of you tried, you can't both fuck and marry the same person (similarly, like a lesser but still creepily large amount of you wanted to, you can not fuck and kill the same person). Nor can you fuck one without choosing two others for killing and marrying.

I threw out everyone who was too dumb to play this child's game (and the people who chose not to play), and we ended up with 136 respondents who got it right (though, admittedly, omitting those who got it wrong didn't skew any of the results much).

Here are the very predictable results... 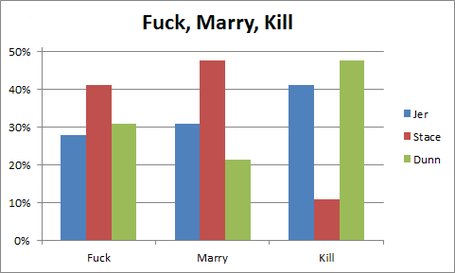 People would overwhelmingly prefer to fuck Stace, the only lady option on a site visited by 84% dudes, and similarly people would like to marry her.

Dunn should probably hire some protection and start filing for restraining orders, because there are a whole lot of people who want him dead. only 10% of our readers want Stace dead.

No one wants to fuck me, apparently, as I landed in last for that category, but my financial stability and proven ability to provide for my giant baby has put me in second place in the marriage category.

However, if we eliminate all the dudes from this survey and just focus on the more important 17 ladies (who actually figured out how to properly play Fuck, Marry, Kill) then the results start looking a lot more favorable to old man Jer... 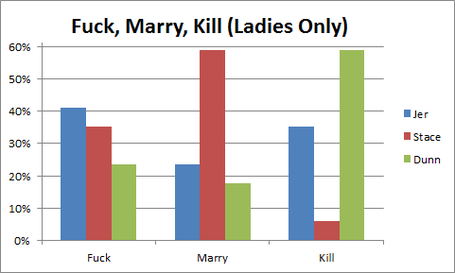 Stace is still prime marriage material, however. Dunn is still a dead man.

I hope this gave you a better understanding of, uh, yourselves. In Part 2 of this series of posts where we examine our readership (likely to come out in a couple of weeks or so), I'll take a look at (and answer) some of the comments, suggestions, and questions you left us in the space provided to tell us how to improve.

Shockingly, it turns out most of our readers are assholes.