Yesterday's article wasn't a trick. It was an illusion!

Share All sharing options for: The Minnesota Wild Would Like You To Know That I've Made A Huge Mistake

Yesterday, I wrote a very touching piece about the retirement of Koivu. It didn't get much attention at the time, but this morning it blew up a bit after Minnesota Wild sportswriter Michael Russo said some mean things about SB Nations:

And then, a Montreal-born actor from The Bold and the Beautiful (and a ton of other things) decided he didn't like it either:

GUY HAS NO IDEA WHAT HE'S TALKING ABOUT. He's got brothers confused: Koivu Announces Retirement http://t.co/wl4OPTh2GK via @BattleofCali

If you were following along with my twitter feed (or Battle of California's feed), you know things started to get a little crazy with Minnesota Wild fans after that when they started calling out some minor inaccuracies in the article.

So much so, that the Minnesota Wild organization itself decided it had to step in... 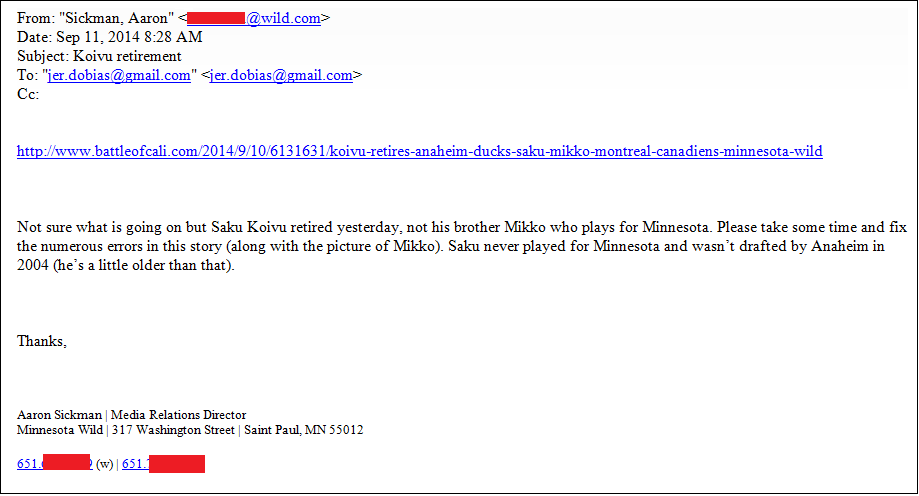 I'd like to sincerely apologize for some of these small oversights. For the record...

... and yet, some of you dipshits got all the way through those "inaccuracies" in the original post and still managed to take it seriously. Way to go, Wild fans, pride of Minnesota!