This ASG in Columbus is a joke. Want to know who the real hockey superstars are? The unsung heroes whose names live on in beer leagues. The names of hockey players who hit, block shots, lead with heart, and assorted intangibles. To the game in Columbus with feeble players who prance around the ice I say: Good riddance.

You have your game in the middle of buttfuck-nowhere and we'll have our own in an icy parking lot in downtown Detroit. Real men will survive there. Hell, I'm sure a few of these selections will be injecting PEDs into the tips of their dicks during the intermission.

I'm very pleased to announce the roster of Team Heads, Elbows, Knees, and Heart. This is a team selected for as the team name suggests. They go out there, punish, and score the odd goal. What they're known for is their dirty play and mongoloid level intelligence.

The team captained by none other than Matt Cooke (assistants Zac Rinaldo and John Scott) are coached by legendary Calgary Flames pugilist and current member of the Adirondack Flames (AHL) Brian McGrattan. McGrattan is quoted as saying:

This is a chance to show the fans of Calgary and all the haters on Twitter that Big Ern still has it. I'm not sure what it is but I'm positive I have it.

McGrattan was later seen confused and lost in a park a few blocks away. After yelling at an elderly couple feeding birds, he made his way back to the rink.

Here is your roster:

The Defense if you can call it that: 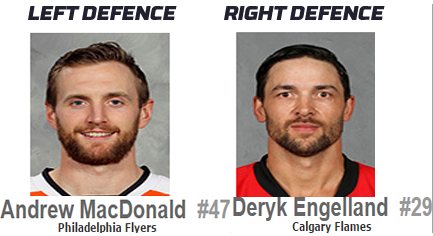 Your goalies? Martin Brodeur, the man and legend. Former cosmonaut Ilya Bryzgalov and finally, the guy the Avalanche traded a second-round pick for: Reto Berra.
Tomorrow we'll have the opposing team: No Guts, No Glory sponsored by Dodge Ram.
Please use the comments to vote in the starting line-up and on Twitter.