As a Devils fan, I believe in a thing called "playing fair." Unlike certain other teams, my favorite team doesn't feel the need to play like feces. As such, I have invited a guest poster to attempt to defend my airtight argument, for the purpose of proving, once and for all, that all Kings fans are illiterate BoC never shouldn't given the posters this power seriously what were they thinking Devils fans are the fairest in the land. So without further ado, please welcome the unedited views of my guest poster (I am legally obligated to mention that Bailey may or may not actually be typing this post). 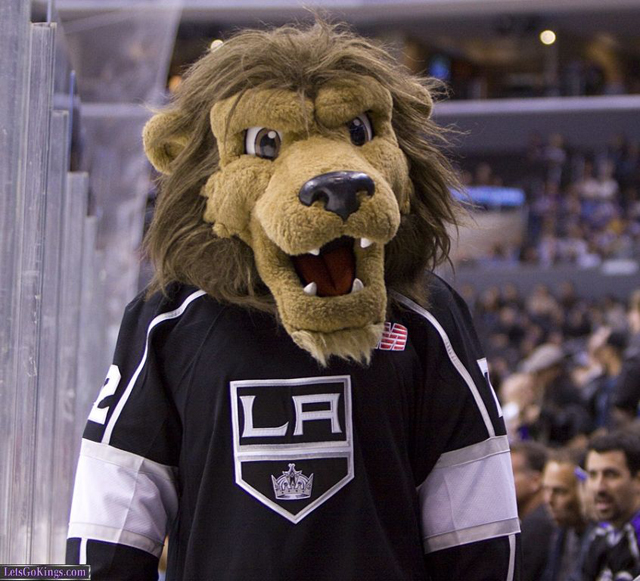 "Matt Greene touched me in an inappropriate place"*

Hello, BattleofCalifornia, I'am Bailey, the mascot of the third best sports team in California named the Kings (After the Sacremento Kings and the Los Banos High School Kings). Now I no what you are thinking, but I'am actually just a regular guy. My therapist says I'am actually "An ideal representation of the typical Kings fan," whatever that means! I'am hear to tell you what the Kings organization are so good!. First of all, Tyler Toffoli is adorable. Won time, he told me to pull his finger, and when I pulled his finger, he farted and accidentally pooped his pants in front of the whole team! He was so embarassed, he told them he had mono. Everyone believed him because nobody on the Kings roster has ever actually kissed a girl. Also, Dustin Brown isn'ot that bad of a guy. Even though he was acutllay a streaming pile of dog shit at birth, he is a success story. Just don'ot ask what he had two do to too become the captain, let'us just say he swabbed the poopdeck many times. Next, there is rumors that Angie Kopi...Kope..Kop...Angie was actually made in a Slovenian Lab (The place where Dracula is from). The Kings are also really good at hockey. Don't believe me? Well we only took 43 seasons to win a stanley cup! This compares favorably to the Rangers (53 years) and the Toronto Maple Leafs (46 years and counting), two of the richest, and therefore best run organizations in hockey. Why, just ask any of our fans from before 2012 to describe how good the Kings are, they'll all tell you! Finally, to finish my argument, Dustin Penner (Our current team chef) makes really good pancakes. I hope that now that you see my point of view, you'll realize why The Los Angeles Kings are actually the best team in the NHL.

*May or may not be a valid quote