The greatest force in entertainment.

There are a lot of ways to define greatness. Some say it's being remembered long after you are gone. Others say it comes from simply being a good person to others. Then there is the American Dream. And since it is American, its definition of greatness is the greatest of all.

Greatness (noun): Being famous and filthy rich while doing as little as possible (see: "The American Dream")

That's where Adam Sandler comes in.

Could he be the next, and greatest, Dr. Who?

This is a man who has done absolutely nothing in the past five years and still has more money than God. He gets paid twenty million a movie and has himself a net worth of three hundred sixty million dollars. And these movies essentially are paid vacations on top of that. He goes to Hawaii. He goes to Africa. He goes to Salma Hayek's bed. "B-b-b-but he writes these movies!" There is absolutely no way Grown-Ups took over 3 hours to write.

The Script for Grown-Ups was originally Sandler just making out with her for five hours.

So we need to honor and applaud this man. Dare I say deity? Sure. This deity. He is the definition of the American Dream and American Greatness. He knew what he wanted, and dammit he took it. And he's been plotting it for a while. Look at all his early movies!

Sandler creates a scenario where we want the dip shit, idiot rich kid who has never worked a day in his life to inherit his dad's massive company over the guy who has worked there everyday and fought to get where he is. Fuck that! Work is for chumps! Go to grade school and mess around all day. Take what is yours because you were the lucky sperm that makes you question evolution. Not because you are "smart" or "industrious" or "not a waste of humanity". Sandler/Billy succeeds, is loaded for life, scores Bridgette Wilson-Sampras, and the hard working schmuck goes crazy and gets shot by Steve Buscemi. Sandler had his eyes on the prize since day one.

Obviously, you all remember that episode of The Simpsons where Homer and his lazy oafish behavior gets poured on to that jerk Frank Grimes. This was the golfing movie version of that except without the insightful meta approach of a deadbeat moron from a work of fiction driving anyone that is remotely based in reality insane. Shooter McGavin is again another guy who has worked his whole life to get where he is. He is so close to his goals to which he has poured his blood, sweat, and tears. What a loser! Luckily, Sandler shows up with close to zero training and kicks his ass. The guy lucks into being the best, winds up rich, lands Julie Bowen, and Shooter loses his mind and gets beat up by the guy who played Jaws who has the Anton Chigurh haircut from No County for Old Men. 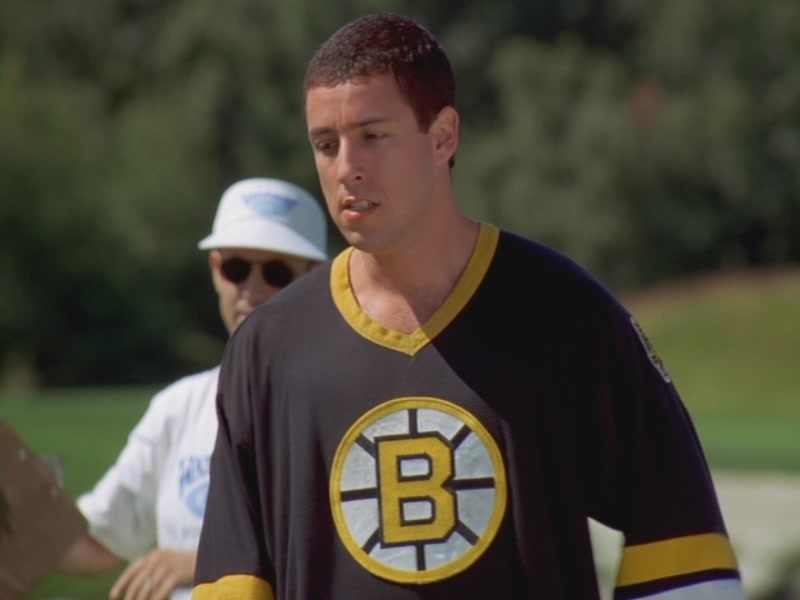 Didn't the Kings just trade for this guy?

Just in case we didn't get it the first time, Sandler returns to preach to us plebeians that it is better to be lucky than to work. This time around, Sandler/Bobby starts out working hard and is fired. He searches for new work, winds up working for free, gets picked on, and lives with his mom. Hey this sounds a lot like me. Anyways, he discovers he is incredible at football by chance, and surpasses everybody in football ever. Everyone that works hard in this movie loses to/gets pummeled by him at some point. This time around Sandler again wins everything, is a hero, could go to the NFL, and winds up with Fairuza Balk. AGAIN, the point being, it's way better to be lucky at something out of the blue rather than ever try to "work" to achieve anything. So go buy those lotto tickets and tell your boss to fuck a dead rat!

The script for this movie is 90% Sandler making weird noises and faces. It was another gold mine.

Don't believe the system works? Look at Adam Sandler himself. He is a man of no real discernible talents, half-asses everything nowadays, and gets paid millions. It just comes from the belief that he is superior for no real reason and everyone should pay to see him scream and fight fat or old people. It's like The Secret, except it actually works, but only for Adam Sandler because we, his adoring fans, can't get enough of his shit that may quite be literal shit in some cases.

He was so confident in not giving a damn about hard working movie makers he cranked out a sequel to Grown-Ups and bought himself another couple of mansions to store his cash. Oh? You want to make an indie-house drama exploring the darkest places people could go when faced with loss? No way. Go see Jack and Jill, and realize that made one hundred fifty million dollars. This was a movie deemed by one critic as the sign of the apocalypse. I'm fairly certain at this point Sandler is adding fake movies to his IMDB profile just to fuck with people who hate him for his rampant success. I mean,

The Gorilla and I

Ding-Dong Dadio and the Farting Nun

Some of these movies may be real that he has been in. Who knows? I don't.

Of course Sandler has helped spread the American Dream to those closest to him. In that he has spent some of his limitless wealth to open Happy Madison Productions, giving his talentless friends the joy of half-assing things and collecting a huge paycheck too. Rob Schneider, Kevin James, and David Spade should have all been dead long ago, but have instead discovered the American Dream brought to you by Adam Sandler©. Now they are entertainment demigods just like him. Thanks Adam!

These guys are rich and famous and you definitely are not and never will be.

When you really think about it, Adam Sandler is California's Dream as well. Sit on your duff, be rich as hell, and hang out with women who are way out of your league because you are famous. It's not his fault either. People love him, put him on a pedestal simply because he deserves it, and shell out twenty bucks to go see him cross dress and fart in Al Pacino's face. If you could get away with that and be filthy rich, you'd do it too. That's the California way, baby. Get famous for no other reason other than that you are awesome and everyone else sucks. Not because you worked hard. That only gets you managing a Big O Tires in Amarillo, Texas.

Adam Sandler is the god we made, need, and deserve,. And he knows it. He always knew it. He knew that he was destined for greatness and did nothing about it. He rode to the top of the mountain preaching the same gospel over and over again. That gospel being, "Fuck you. I'm awesome. You suck. Go see Little Nicky." And you did.

We applaud you, Adam. We love you, Adam. The world has owed you from the start, and it has paid up. Repeatedly and heavily. So I am proud to enshrine you forever in Greatness in the Battle of California Arby's Bathroom of Excellence™. Continue to serve us proudly, your humble followers, forever and ever. Amen.