Sharks Gameday: Enjoy and ice-cold mix of slush and syrup

Slushies are the best mix of ice and sugar. Snow cones suck.

Share All sharing options for: Sharks Gameday: Enjoy and ice-cold mix of slush and syrup

Take any idiot kid and give them a snow cone, and what is the first thing they do? I mean, right after they drop the ball of ice on the ground after squeezing the wax paper cone too hard and they throw a tantrum until they get another one. They suck the flavor syrup right out of the ice, similar to how Milan Lucic handles uninal cakes. Then they're left with a stupid ball of semi-flavored ice that doesn't match that first hit of pure, uncut syrup, and they throw another tantrum. 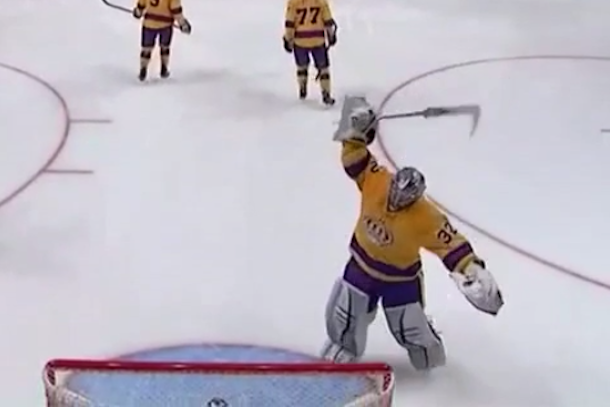 Now, what if I told you there was a way you could blend the syrup with the ice to form a homogeneous mass of Cold Motherfucking Flavor? You're intrigued right? Now, what if I told you that every single minimart in this great country has a machine capable of producing this magic elixir? What if I added that they'll serve it to you in a tall bucket with a greater volume than your stomach, and for sure bigger than your bladder? And all consumed through a thoughtfully large-bore straw capable of delivering all that goodness into your mouth with no effort? "Take all my monies." That's what you'd say. Because I just described a slushie.

There are no pictures of giant snow cones

Slushies come in comically large containers. Why? Because they're delicious and nobody is content with just a single cue-ball of flavored snow. Go ahead, make cone out of a refrigerator box and dump a bunch of shaved ice in, then pour Red Flavor syrup on top. It's going to drain out of the ice and pool in the bottom, but whatever. Then offer it someone on the street. "What the fuck is wrong with you, freak, get that out of my face." Ah, but take a brand new medium size trash can (cleaned, of course) and fill it up with delicious slushie, you've now made a friend for life. "Thank you, this is an adequate amount of slushie!"

The Sharks are the slushies of the world: often blue, available 24/7 in extremely well-lit buildings, and a perfect blend of life-giving water and the flavor you crave. The Kings are a disgusting messy snow cone served from a questionable cart in a dark corner of the park. You have no idea what you're getting, but it's going to send you to the bathroom and maybe the hospital.

Prediction: Drew Doughty makes snow cones out of the frozen spit in front of Quick, much to the delight of Kyle Clifford. Joe Thornton, Hertl, and Donskoi just look at them while leaning on the bench and drinking slushies, happy and content.